It was a beautiful, sunny, Sunday morning.
We hadn't been married but 2 years.
We decided that today, we would go get breakfast at
our favorite Mexican, breakfast, taco place
down in Dallas.
Sergio decided to take the back roads.
There was hardly any traffic since it was early in the morning
and most people were either still sleeping or at church.
We were on our way to eat.
We held hands across the the console that separates the seats. We drove our old Ford station wagon that
we had just finished paying off.
I was on my first year of college.
My sweetheart had just taken a job as a cook at the cafeteria
to help pay for my schooling. Big smiles decorated our faces.
Suddenly, I felt a painful sting on my forehead, then everything went dark for a few moments.
I saw a hazy shape waving to somebody outside our car
yelling, screaming, there was blood on his chest.
He rushed back and forced the shirt he had taken off his body and ordered me to "press this against your head!"
I did as I was told.
Suddenly men came around and were trying to pry open my side of the car. Why were they trying to get me out?
Everything was hazy. Like in a dream.
They couldn't get me out.
They now had an ax, I think.
A woman was now standing next to my husband along with
what seemed to look like a paramedic.
Lights flashing.
The police.
Now I was being carried out and taken to the ambulance.
I was scared.
I was nineteen years old.
In those days, only "rich" people owned cell phones.
I found out much later, after we were discharged from the hospital, what had actually happened to us that sunny, Sunday morning.
As we were driving to our destination, another person also had had plans.
His plans had started the night before.
In a bar.
He had been out all night drinking. He was so drunk that
when he hit our car from behind, he hit it with such force that he sent our little station wagon flying into the air and
into a ditch by the side of the road.
It landed on the right side.
My side.
In those days, seat belts were not mandatory.
And I was not wearing mine.
The police told us later that I was lucky to be alive
because I could have flown out the window due to the force with which he hit us.
The man hit us and kept on going.
Luckily, a woman was driving a few yards behind him and saw everything. After stopping a few seconds to assess the situation, she yelled to my husband "Don't worry, I'm calling 9-1-1! I'll be back!"

source
She then proceeded to follow the drunk driver for several miles where she witnessed him driving into---a police car.
They arrested the man and put him in jail with not a scratch on him.
We later found out that because this was Dallas County, and because the jails are filled to the brim, he was released that same day on "his own recognizance". He never showed up for court and was not insured. What a surprise.
In the meantime, the good Samaritan, returned to the scene, gave a full report to the police that were still there, asked after us and went on her way.
We never got her name.
We never got to thank her.
I received several stitches between my eyes and deep into my right eyebrow. I now have to draw-in my eyebrow where the stitches once were because no hair grows there anymore.
But we were truly protected by an angel that day.
The Good Samaritan.
And though we did lose our car (the car was totaled and since we didn't have full coverage it was left at the city dump) we still had each other.
The next few months were a struggle for us as you can imagine.
We only had THAT car.
I took the bus to school. Sergio bummed rides to work.
We had to borrow money from our parents to buy another car.
We paid them back for months to come.
I know the Good Samaritan that day did not have it
in her plans to help out  a couple of kids that were injured due to a drunk driver.
But she did. She went out of her way to make sure
she did her part as a good citizen and as a good "neighbor".
This is not the first time this had happened to us.
And we have returned the "favor" many times.
It is this scene that plays out in my mind over and over whenever I get disillusioned with humanity.
Whether it's by watching the news or reading some horrific story about what's being done to children or animals.
I always go back to my mental file of Good Samaritans
and remember: There is still good in the world.
﻿ 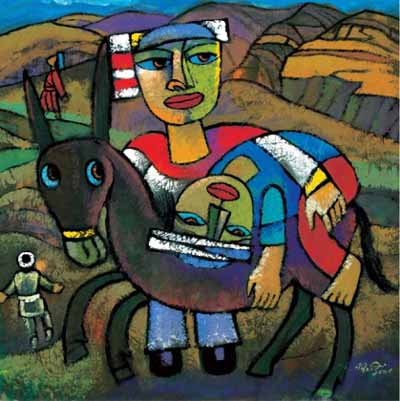 Posted by How Sweet It Is-A lifestyle blog at 8:59 AM