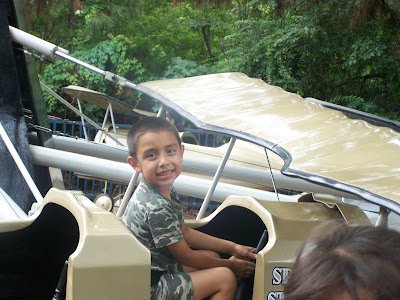 To retain or not to retain? That is the question. Today I had a meeting with Aaron's counselor. We have suspected all along that Aaron is dyslexic just like his dad. But today, the counselor said Aaron is highly gifted and scored in the 94% percentile as far as IQ. His IQ is VERY high. What?? I mean I knew he is a bright kid, but he is very slow at reading and writing. She said that at this time Aaron should be at a 20-22 in DRA (whatever that means) and he is only at an 8!!!???
So we are faced with the dilemma of whether to send him to 1st grade again next year or to 2nd grade where he will instantly be behind all his peers. One of the things his counselors mentioned is that he is a very young first grader. His birthday is August 19th and so he just turned 5 when he started kindergarten. She said verbally Aaron is astounding and very gifted. But when it came to reading comprehension his score was around 1/2 of what the verbal score was. He is a good candidate for retention she said. But the decision ultimately is left up to us. I wonder if his teacher was just not up to par with what he needs?? He wouldn't get the same teacher next year, we are told that his new teacher regardless of the grade would be "hand picked" for him and that they would continue to monitor him for other learning disabilities because apparently he did not show any dyslexic tendencies. I am doubting this, because in my heart I know he is dyslexic. He is always getting 3's in math, science and other subjects, but only 1's and 2's in reading and writing, with his latest grades being 1's in both :(
Both my other children have been very good readers, but then again their birthdays are in October so they had almost a year to develop. I don't know what to do. I spoke with Aaron and he seems keen on the idea of being a "1st grade helper" next year because he is so smart. But then he asked, "what about all my friends? They'll be in 2nd grade."
I am going to take this to the Lord. I want to know what HE feels would be best for HIS son, after all I am just his mother for only a short time and I want to do what's best for Aaron. He is such a special boy, before bed he said "Mama, I'll do whatever you want me to do, either 1st or 2nd" then he kissed me good night and gave me a big, long hug.
I hate making these types of decisions. I just don't want him to be bored in 1st grade again. This guy is very sharp, it's just the reading part that gets him. Maybe I can get him a tutor for the summer....I guess I'll have to wait for an answer.
Posted by How Sweet It Is-A lifestyle blog at 10:36 PM