This little nightstand is about to get hit by the magic wand! 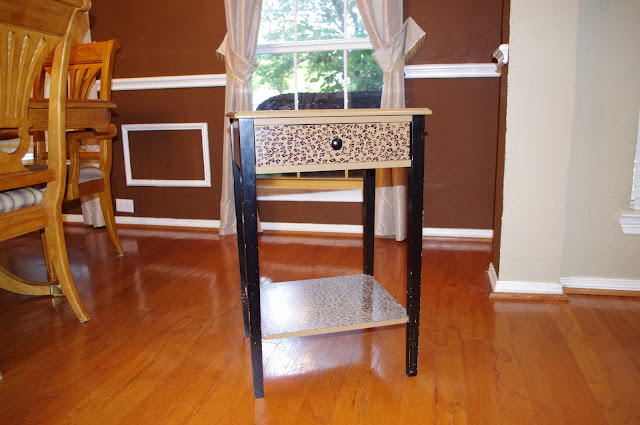 You've seen me transform my cheap armoire before with Annie Sloan Chalk Paint and now you get to see
this cheapo nighstand get the royal treatment next!
A little background on this piece:
It cost me about $30 nearly 12 years ago. It is made of fake wood and most people would trash it after having so long.
But I wanted to give it a fresh new look.
I want to show you what YOU can do with pieces you may have and think that they are not worthy of keeping.
This time around I used the Annie Sloan Chalk Paint in Graphite for the all over color but I added Smoky Mountain Grey from CeCe Caldwell's line of chalk paint for comparison.
I'll tell you which one I prefer at the end of this post :) 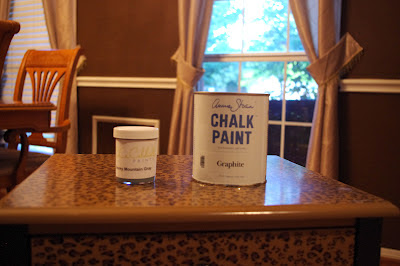 Here are the steps I took with this piece:
First I removed the drawer knob.
I did not have to sand this piece because I was using chalk paint.
Chalk paint is NOT the same thing as chalkboard paint.
I used a medium, angled brush to apply the first coat of the graphite paint.
I let it dry and did two more coats. The reason for this is that I wanted a nice sleek finish and not the "shabby" look you can get from chalk paint.
Chalk paint dries pretty fast and it has no smell. This is what I like about working with the Annie Sloan brand.
After I was satisfied with the finish, I went to work on my stencil.
Using my Cricut cartridge Storybook and using my Gypsy to design it I measured the area I wanted to stencil on the top of the nightstand. I then input the dimensions into my Gypsy and cut the stencil out on cardstock.
Because I was making a stencil, I had to use the "negative" part of the diecut and it took me some time assembling it with tape on the top of the piece.
My husband advised me that I could have just used spray adhesive to put down the cutout on top of the silver metallic paint then, take it off and repaint with the graphite.
I, of course, wanted to complicate things and did it my way.
I actually like my way better after trying his way on the bottom portion of the nightstand. I did not want to use up that much of my silver metallic paint doing it his way.
You can try it either way considering the cost of the paint.
After stenciling the top and bottom of the piece I let it dry and in the meantime I painted the drawer front with the
Smoky Mountain Grey sample from CeCe Caldwell.
It spreads beautifully but I did notice it has a slight odor.
Now, if you're like me and don't want to have any odors or are bothered by them because of asthma, then I would suggest the Annie Sloan brand.
As this was drying, I went ahead and painted the knob with the same silver Martha Stewart paint I used on the stencil.
Here are some pics of the process: 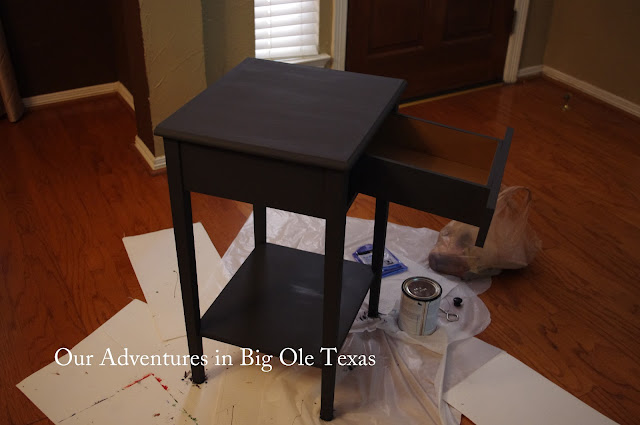 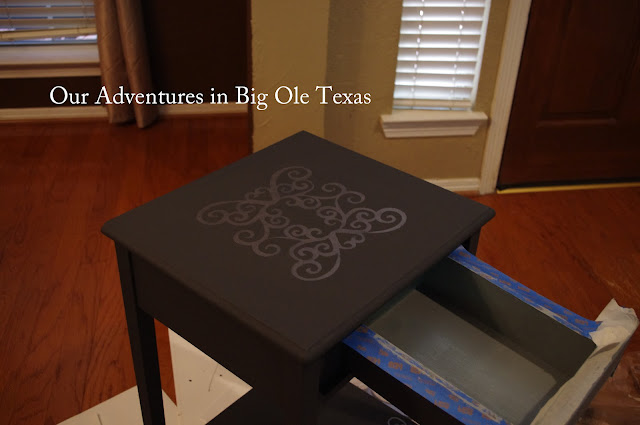 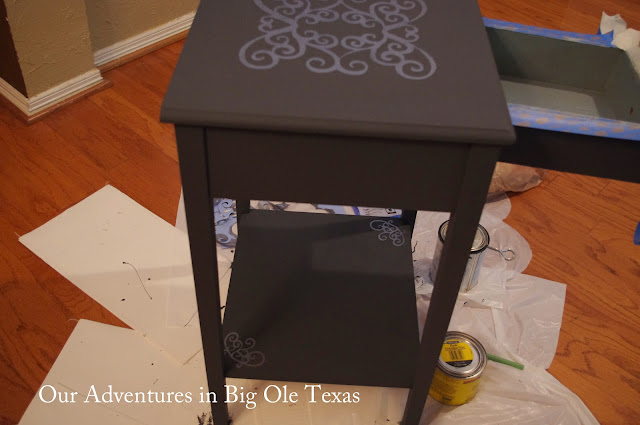 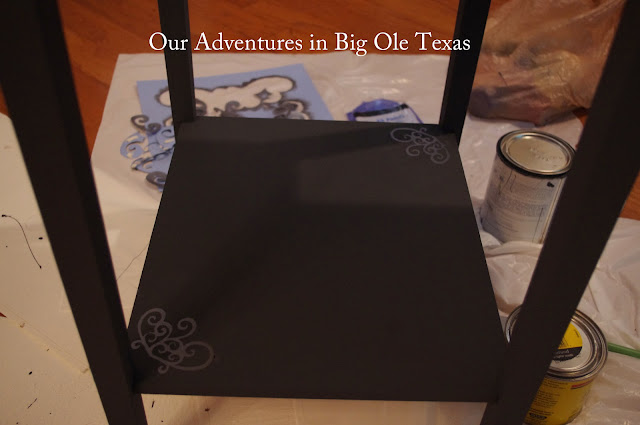 And some of the finished piece :) 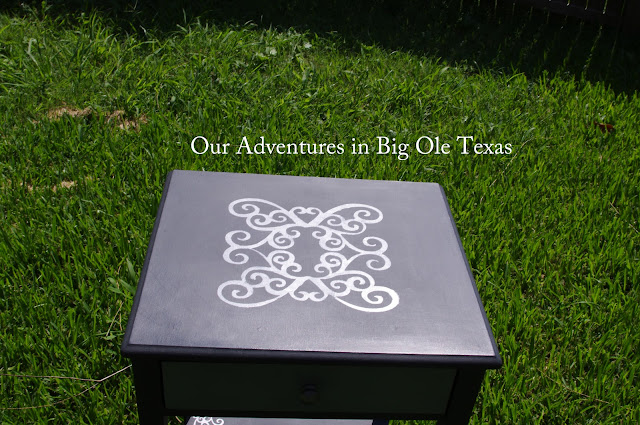 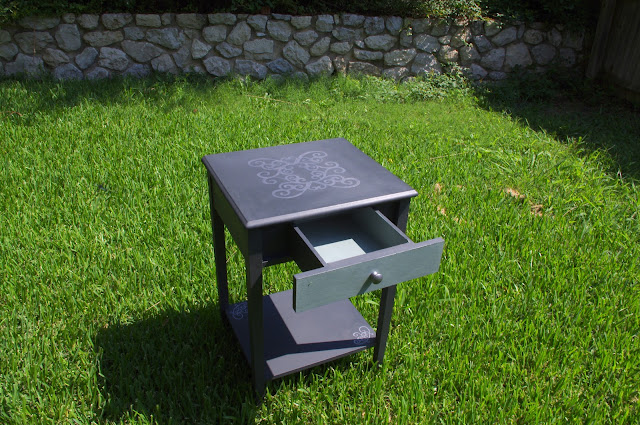 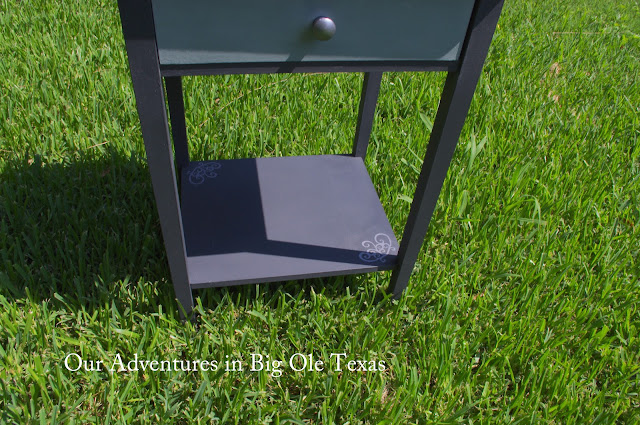 All in all a fun little project.
So, remember, don't throw out that piece of "junk" just yet.
Instead see if you can transform it!

Be back soon!
And don't miss any posts, get them delivered right to your inbox by subscribing to my blog on the right hand side>>>>

Between Naps on The Porch
Under the Table and Dreaming
You're Talking Too Much
Get Outta My Head Please
Cowgirl Up
The 36th Avenue
Primp
Posted by How Sweet It Is-A lifestyle blog at 9:36 PM