3rd day's a charm and you are not alone!

After leaving California and getting lost on the way out, we finally arrived in Phoenix and took the time to get some dinner. The kids were tired of the traveling and were ready to get to Roswell. I didn't have the heart to tell them we were still a good 6-8 hours away ((YIKES)). We got on the road again and while driving thru New Mexico through the winding roads of the mountains, the kids were looking out the window at the sky. We had never seen so many stars! It was beautiful.
It seemed like forever before we arrived at Roswell. We got there at 5 a.m.!! We left Cali at around noon the previous day, it was not a good trip. First all the winding roads thru the dark mountains and then it started to SNOW! We finally got to the hotel and we just fell into bed with our clothes on and everything! We hardly noticed the stench in the room but when we woke up 5  hours later we could REALLY smell it! It smelled like someone had cooked some bad curry dish while wearing cheap cologne the day before! As Sergio and the kids headed down to the car to get our luggage, I called the front desk to arrange a room change! They quickly complied. After grabbing some lunch at the Sonic (believe me there ain't much to do in Roswell besides alien watching)
we headed downtown to the UFO museum. 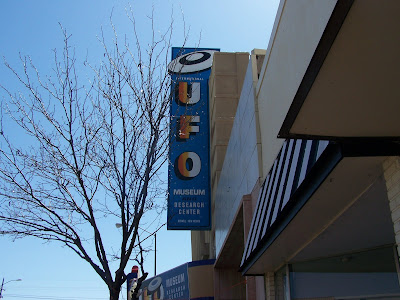 I tell ya it's a VERY interesting experience. In it they have a little theatre where one can watch and learn all about the crop circles and various sightings. Because the museum has been so successful it has enough money to build a new facility down the street which will look like this: 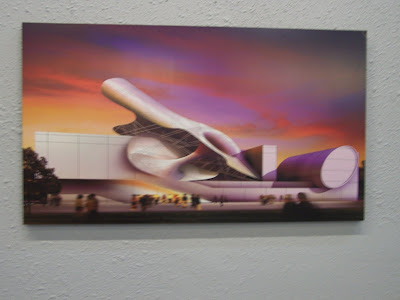 I can't wait to go back again and see it....well maybe not. Like I said there is not much to do in Roswell, but Aaron sure got a kick out of the displays: 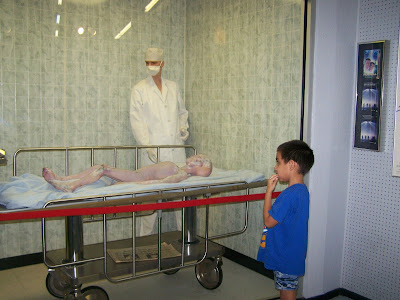 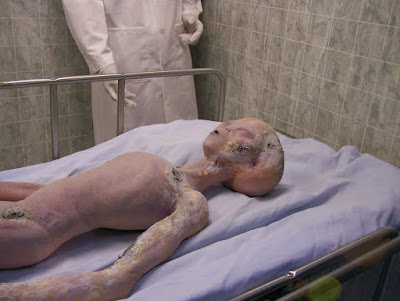 Creepy huh?
I don't think we're alone. After reading and looking at many pieces of "evidence" who am I to say this could not have happened. There is still much to be learned about how we got here and if there is other life "out there". Fascinating to say the least.
After learning all about UFO's we headed to some souvenir shops to look around. Lo and behold we ran into a cute little antique's mall. Now you KNOW I loves me some antiques!! Ellison found a really neat Disney Art book for $2!! It's from the 1960s so of course I had to have it for my collection (I collect antique books, especially children's books). Then we were all pretty tired so we went back to the hotel and just relaxed while the snow fell outside our window.
The next morning they were announcing blizzard like conditions all the way home! GOODY !!!
After 9 harrowing hours of white knuckled driving we were finally home! It was nice to get away but they don't say it for nothing..."THERE'S NO PLACE LIKE HOME",.
Posted by How Sweet It Is-A lifestyle blog at 7:46 PM