The second day was beautiful just like the first, sunshine and warm temperatures. We decided we wanted to go into the city and took the 1 hour drive into Hollywood. I tell ya, they're not kidding when they say California has crazy drivers and lots and lots of traffic!!! After spending what seemed like hours (maybe it was??) stuck on I-5 then off to 101 and our exit Hollywood Blvd, we drove into Hollywood and Aaron was completely amazed at the Hollywood sign up on the mountain. He said "Momma, it's just like in the movies, it's REAL!!!!" Well, I'm not so sure how much of Hollywood is "REAL" but it certainly was interesting!! We found a place to park (not cheap) and walked around until we found Grauman's Chinese Theatre. I  have ALWAYS wanted to come here and see the hand and foot imprints of my favorite stars.I was hoping Michael Jackson's was there, but it wasn't :(
I did take a pic with the imprints made by my favorite actor-JOHN TRAVOLTA!!
We took pictures with Darth Vader and Princess Lea who promplty informed me that they posed for "tips" and to not be "stingy". Wha???? So $15 later, Aaron took several pics with them and Darth insisted he wanted "Mom" to take a pic with him??? So I posed too :) 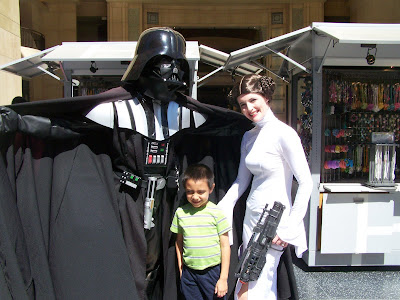 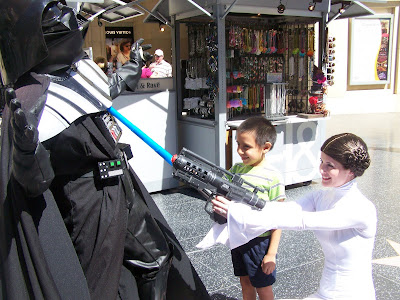 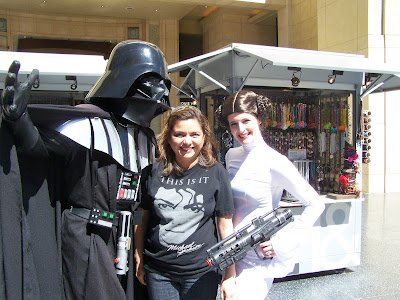 We saw Marilyn Monroe, Woody, Shrek, "Michael Jackson with the obligatory umbrella", Jason from Friday the 13th (this guy chased me!!EEEEEK!)and we took pics with the VERY lifelike wax statue of Wolverine!! I could almost feel his muscles next to me ((sigh)) That guy is truly handsome, well I guess you have to be to be a MOVIESTAR. 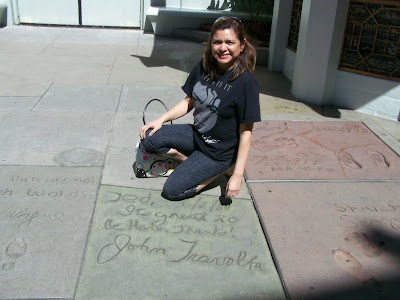 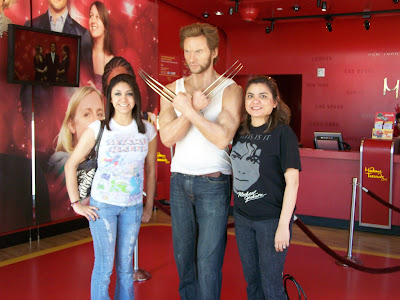 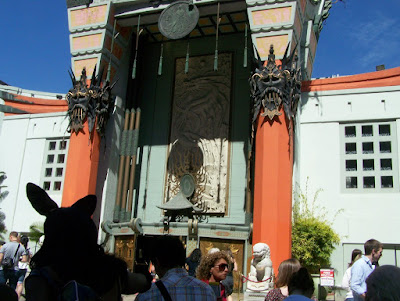 Grauman's Chinese Theater
Soooo after all this walking around and posing, etc, we worked up an appetite. I initially wanted to wait until we got to CHINATOWN to eat some authentic meals, but the kids groaned and said they wanted pizza???
Luckily there was a hole in the wall pizza joint and we ate there. It wasn't bad and the kids were now in a better mood. In my family there are two things that tick us off: lack of sleep and an empty belly!! (for the guys it's mostly an empty belly, for me and Ellison -lack of sleep, don't ask my husband about it there are some REALLY horrible stories about me and insomnia)
Soooooo after buying a few souvenirs and my trying to convince the guys that we REALLY needed to take a 4 hour bus tours into the hills and see all the celebrities homes (they weren't buying it, so I decided I need to come back to LA by MYSELF! so I can go see the celebrity homes AND visit MJ's kids in Encino!! ;)) we headed to Chinatown!!
In Chinatown we shopped in a supermarket and I picked up a few packages of rice noodles so we can replicate some Pho back home. We walked to the Buddhist Temple and were in awe of it beauty and serenity. I want my children to be exposed to many different cultures and beliefs. I want them to know and learn that just because others think or act differently from us they are just like us: humans and children of God.
Things got a bit iffy when our car was acting a little strange. I think it was all those mountains and winding roads. We thought we may need some transmission work done b/c it was acting so sluggish but after we put in some transmission fluid it was a lot better (note to self: check fluids before hitting the road, DOH!)
We enjoyed looking at the different shops in Chinatown and headed back to the hotel. It was a good day. 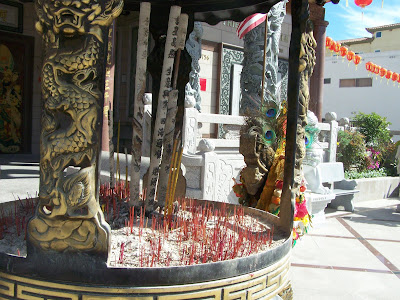 The front of the Buddhist Temple 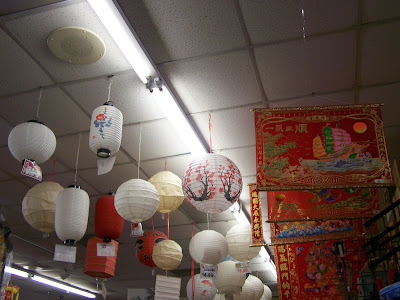 Pretty Lanterns in a shop 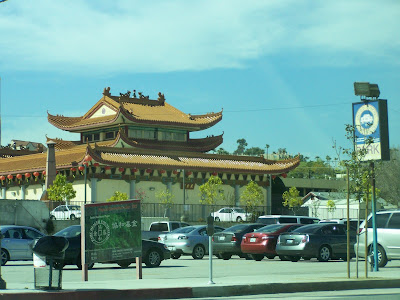 Email ThisBlogThis!Share to TwitterShare to FacebookShare to Pinterest
Labels: Hollywood and Chinatown