This past weekend was a whirlwind of activity. From the usual and hated laundry, cleaning the house and running errands, to the being thrust into organizing the disaster area that is my little guy's room-Saturday was an exhausting day.
We had the missionaries over for dinner Saturday night and since we had had a usually hectic day, I thought we should just pick up some pizzas from our new favorite pizza joint-Durkin's.
About an hour before dinner, the missionaries called and asked for a ride to our house. What? I thought, can't you ride your bikes? Nevermind, I told them SUUUUREEE my hubby can pick them up.
At that time the hubster announced that he needed to shower. So I told him you better hurry up because that hour is gonna be up like this {snap}. I called in the pizza order and decided to go pick it up about 30 mins. before dinner time. Pleeennnntttyyy of time I thought. I had actually gone earlier and picked up some bagged salad, french bread and orange sherbet, Canada Dry and frozen pineapple juice to make some punch. Got.It.Under.Control. :D
But alas, as it always happens, on the way to picking up the pizza,there in the middle of the always-under-construction-road, was an ambulance and several cars. There seemed to be some injured people. And as bad as I felt for the injured, I really needed to get through to get the pizza!!
You see, according to my kids, I am ADHD, OCD, and perhaps a bit of an Aspie (my oldest guy is on the Spectrum, so it's plausible I am too, who knows) so between my daughter telling me to "calm down" and my praying in my head to be patient, I had a call coming in from my hubster saying there were THREE missionaries not two. Agghhh!!!! I just can't take "monkey wrenches" in my plans. My PLANS were for 2 missionaries, TWO! But, ok, go with it, I told myself.
We arrived at Durkin's picked up the pizzas and took another route home.
We beat the hubster home and we're ready to eat!
We had a great time with the misshies, talking, laughing, story telling and  (begrudgingly) ending the night on a positive note. One of them read us a scripture about Enduring to the End. How fitting, that scripture. I shall endure to the end, as difficult as life may seem with my little plans being thrown a monkey wrench once in  a while, my problems seem extremely miniscule compared to others' GIANT trials.
Keep things in perspective and endure to the end my friends. That's what I have to keep telling myself.
On a lighter note, and I guess I should have started this post with it, is that we took the little guy to Lowe's to build a little wooden toy pull car. You may recall that the little guy loves to work with wood blocks. This was a time for him to build his own little car with nails and hammer in hand. He enjoyed it and we walked out with a hammer and a wooden tool box making kit for him to make at home. 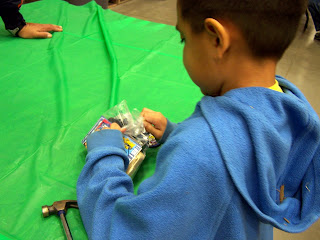 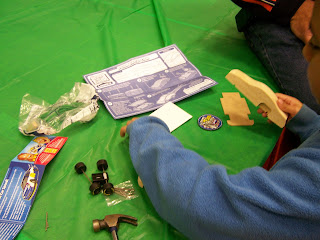 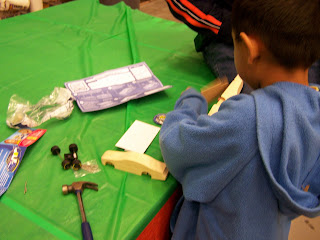 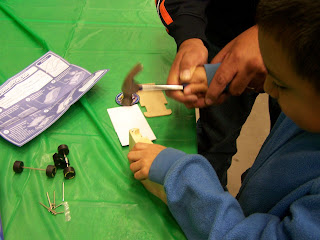 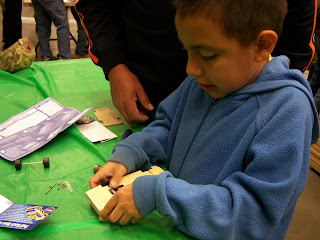 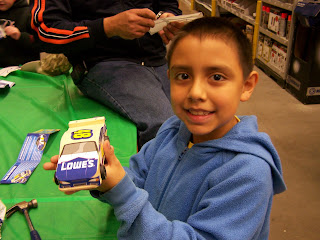 I also walked out with grandiose plans of planting my own vegetable garden (again) and a cart filled with various seeds and two bags of fertilizer and soil. {I'm all Gung Ho about this planting gig until the days turn into 102 degree hell days and I stare outside at the sizzling plants and  mutter "Meh, to heck with it,I'll just buy the darned vegetables"}

So, that's our Saturday. Sunday we had church as usual then we had some good friends over for sandwiches. These friends are the parents of my little guy's bestest friend and we really like them. I even found out that the husband is actually pretty funny and gets along REAL well with my hubster. It was funny to see him "rib" my hubby.
Good times, I tell ya. Good times.
Laughing and having people over always, always puts me in a good mood. Except, when it's the COPS. But that's a completely 'nother story.

Posted by How Sweet It Is-A lifestyle blog at 5:12 PM