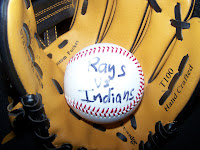 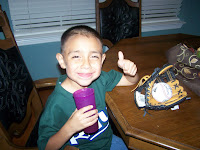 Aaron is playing advanced TBall and he has been doing really well. In the game against the Indians, he did so well hitting the ball without the T and "outing" a couple of players as a third baseman, that he got the ball for the game! The coach announced it at the end of the game and you should have seen Aaron's face light up! He really likes playing this game and he doesn't even go to practice b/c it's on Sundays.
We are so proud of our little guy, especially since neither one of his parents are athletically inclined!
Posted by How Sweet It Is-A lifestyle blog at 10:40 PM