My grandma, whom I call Viache (don't ask me why or what that means, I made it up when I was 9) has been here visiting us for about 1.5 months (yes I have a thing about time and numbers) and she just brightens up our days and nights with her silly anecdotes (I think WE are the only ones who think they're silly, she is totally being SERIOUS) but she tells the most hilarious stories. Here's a few gems (and I am totally NOT mocking her):

We were talking about genealogy and our family tree, where we come from, the tribe her grandma belonged to in Mexico etc. Then out of nowhere she tells us her grandfather was an Arab! Wha....Hello, grandma your grandfather was French! Hence your "white skin"!! I just went along with her and told her "no wonder people think I'm Pakistani!"

Another one....we were talking, or rather she was about her divorce from that good for nothing sob...(her words, my grandpa) and how she stopped working with her lawyer because one day he started coming on to her! Wha.....I asked, "Grandma, the lawyer you hired a couple of years ago...or are you talking about some random lawyer back when you were young?" To which she replied "I wish he WAS young, HA". I just sat there dumbfounded.

She recounted how the attorney would lock the door behind her and start to "grab her and hug her" so she was "onto him" and would not put up with that sort of behavior and so she stopped going there. (Just for investigative sakes, I called my cousin, with whom she lives and she said everytime grandma went to see said attorney, she was always there with her, in other words this never happened). When I retold the story to Sergio he just had a good laugh. Now, remember I am not making fun of grandma, it's just that her tales get more outlandish with every visit she makes up here.

Last night she was talking to Sergio and telling him some stories about her youth. She told him how she was horrified to see her sister die right in front of her from vomiting! :-O ...umm my grandma is an ONLY child!

I could go on and on, but ....I don't have time right now. Maybe later, after she leaves and I collect more gems. But this morning Sergio (bless his heart) took her shopping to Ross. As most of you know I despise shopping so I am eternally grateful that my dear husband doesn't mind doing these types of things for me and grandma.

Well, anyway, I told him I am going to be shopping for some silver shoes to attend a wedding next week. He sent me a picture of these: 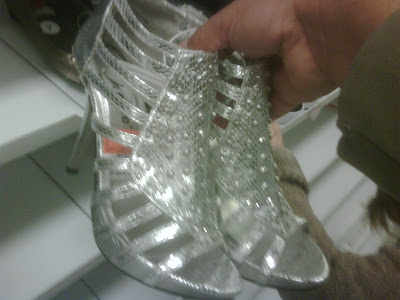 His next text was "grandma likes them". I replied, good but I will look for my own shoes thank you. His next text was "she likes them for her. Her friends would be freaked out if she showed up with them". Like heck they would! The friends she speaks of are at a Daycare she goes to every day!!! 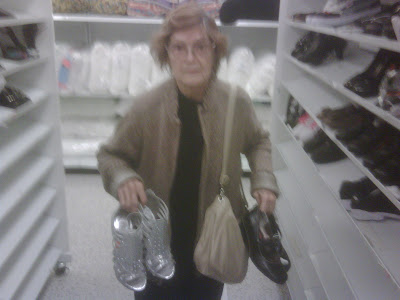 And last but not least, my grandma loves to dance! Now I know where I got my dance moves (and I am not saying that in a self deprecating way;))

Sergio took a video of her dancing. Unfortunately I can't seem to upload it. Let me see if I can put it to youtube. Keep in mind she had just started warming up here and was not in "full swing" yet (like when she and I started dancing to Daft Punk music that Ellison uploaded to my pc).

Enjoy! And stay tuned for more zany stories from the two Auroras. (Yes I was named after her...not the Disney Princess, my grandma:))