Subarachnoid hemorrhage (SAH) implies the presence of blood within the subarachnoid space from some pathologic process. The common medical use of the term SAH refers to the nontraumatic types of hemorrhages, usually from rupture of a berry aneurysm or arteriovenous malformation (AVM). The scope of this article is limited to these nontraumatic hemorrhages.
Epidemiology


Annual incidence of nontraumatic aneurysmal subarachnoid hemorrhage is 6-25 cases per 100,000. More than 27,000 Americans suffer ruptured intracranial aneurysms each year. Annual incidence increases with age and probably is underestimated because death is attributed to other reasons that are not confirmed by autopsies.


Varying incidences of subarachnoid hemorrhage have been reported in other areas of the world (2-49 cases per 100,000).


An estimated 10-15% of patients die before reaching the hospital. Mortality rate reaches as high as 40% within the first week. About half die in the first 6 months.


Mortality and morbidity rates increase with age and poorer overall health of the patient.


Advances in the management of subarachnoid hemorrhage have resulted in a relative reduction in mortality rate that exceeds 25%. However, more than one third of survivors have major neurologic deficits.


Blacks have a higher risk for subarachnoid hemorrhage than whites (2.1:1).[1]


Incidence of aneurysmal subarachnoid hemorrhage is higher in women than in men.


Mean age of those experiencing subarachnoid hemorrhage is 50 years.

On April 21st, 2011 I suffered a SAH. I have been dealing with hemiplegic migraine disorder for about 9 years. Two weeks before onset of SAH, I began experiencing migraine headaches originating in a different part of my head. Whereas my hemiplegic migraines originated on the right side of my face with tingling and generalized weakness, these NEW headaches originated on the back of my head where the neck connects. I experienced stiffness in the back of my neck and it was very bothersome. Five days before SAH, I had a horrible headache. I remember having a bad feeling that day that something was wrong. However, being used to the migraines, I simply took two Tylenol and went to bed to sleep it off. Later that week on Thursday I went to work as usual. When I arrived home,as I was talking with my husband in the garage, I felt extreme pressure in the back of my head but no pain. I immediately knew something was horribly wrong. I felt like I was going to pass out and told my husband so. I tried to wrap my arms around his neck as my body quickly went numb.
My husband dragged/carried me into the living room and laid me on the carpet. By this time I could no longer talk.
He called 911, and as he did, a friend of mine was coming in. She talked to the 911 operator while my husband sat holding me scared out of his mind. Thankfully, the paramedics were nearby and came right over. They took me to a hospital well known for their expertise in Neuro trauma.
I spent 9 days in the hospital. Two days in the Neuro ICU.
I was subjected to MRIs, MRAs, CT Myelogram, Femoral Angiogram (the gold standard I was told) and given many meds to prevent any more bleeding.
Here I am alive by the Grace of God.
It is day 49 since the onset of SAH. I am taking it one day at a time. I cannot drive for fear of a dizzy spell. I spent most of my days in bed and I am scheduled to have another femoral angiogram in a couple of weeks. This time they will be looking at my spine for the origin of any aneurysm.
It is scary and at first I didn't think SAH was a big deal, until the Neurointerventionist told me that if I went home I would likely die.
I am writing this down in hopes that if you or someone you love has migraines that suddenly change, with neck pain, to go and see your Neurologist immediately.
The doctors told me I was very lucky that I was at home and got to the hospital so quickly.
In fact, they were about to discharge me that next day, but ordered one more CT scan just to be sure. It was that one that showed the blood in the SA space. The tests they ran upon admission showed nothing.
It's better to be safe than sorry.
Throughout my blog I plan to document the next few days, weeks, or months (however long it takes) until I am fully recovered. It is frustrating at times to be confined to my home but at least I can walk and talk now without slurring.
We'll see what that next angiogram shows.

UPDATE 12/2/2011
It has now been over 6 months post SAH. The second Angiogram showed no new bleeding or abnormalities.
I am scheduled for a full workup of MRI/MRA's in the next few weeks. The migraines have subsided as I am on medication now for them. I attribute my good fortune to my faith and my overall good health.
I am taking it day by day since the incidence of this reoccurring is quite common and I was told the next time I won't be so "lucky". Most patients that have had an SAH will have another one that will most likely cause death or severe deficits. I am praying I am not one of those cited in the statistics. 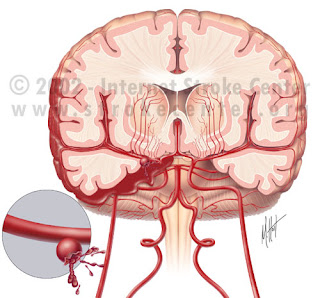